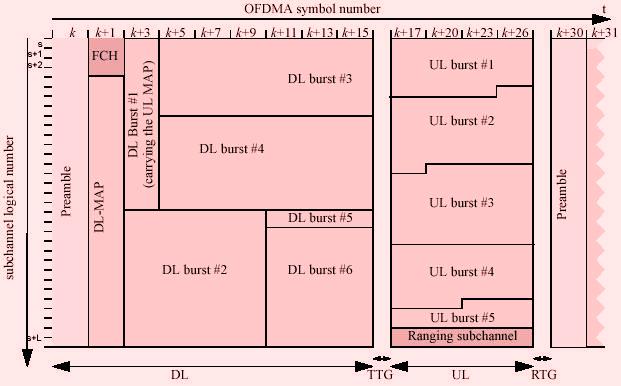 The downlink sub-frame consists of the Preamble, frame control header (FCH), DL_MAP, and downlink data burst. To assign flexibly and effectively the radio resources, the resource allocation of each frame is variable. Each frame is broadcast through the broadcast message.

Preamble seizes the first symbol of downlink sub-frame. It is used for the SS to get the time and frequency synchronization and get the DL_PermBase, Segment number, and IDcell information of the BS.

The position and size of the FCH are fixed in the downlink sub-frame. It is used to send some basic frame control information and demodulate the parameters of DL_MAP message.

After the demodulation, the SS can judge the data according the CID information in the MAC PDU header.

Ranging sub-channel is competitive and is used by the SS to originate the competitive Ranging and bandwidth request information. All the SSs can be used and the BS is used for detection.

WiMAX antennas, just like the antennas for car radio, cell phone, FM radio, or TV, are designed to optimize performance for a given application. The figure above illustrates the three…

Naturally, the first application for which a wireless alternative was developed and deployed was voice telephony. These systems, called wireless local-loop (WLL), were quite successful in developing countries such as…