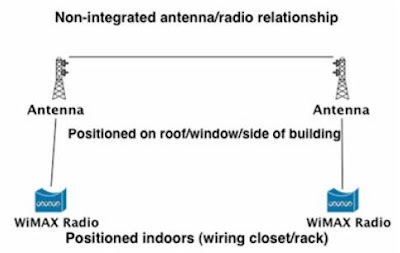 At the core of WiMAX is the WiMAX radio. A radio contains both a transmitter (sends) and a receiver (receives). It generates electrical oscillations at a frequency known as the carrier frequency (in WiMAX that is usually between 2 and 11 GHz). A radio might be thought of as a networking device similar to a router or a bridge in that it is managed by software and is composed of circuit boards containing very complex chip sets.
WiMAX architecture, very simply put, is built upon two components: radios  and antennas. Most WiMAX products offer a base station radio separate from the antenna. Conversely, many CPE devices are also two piece solutions with an antenna on the outside of the building and subscriber station indoors as illustrated in the figure below.
The chief advantage of this is that the radio is protected from extremes of  heat cold and humidity all of which detract from the radio’s performance and durability. In addition, having the antenna outdoors optimizes the link budget (performance of the wireless connection) between transmitter and receiver especially in line of sight scenarios. The antenna is connected to WiMAX radio via a cable known as a “pigtail”.
One simple rule for wireless installations: keep the pigtail as short as possible. Why? The longer the pigtail the more signal is lost between the antenna and the radio. The popular LMR-400 cable, for example will lose about 1 dB (pronounced “dee-bee” for decibel, a measure of signal strength) for every 10 feet of cable. Very simply put, if an antenna is placed at the top of a 20-story building and the radio in the wiring closet on the ground floor, one may lose all signal in the cable.
Related Posts

Point-to-Point(P2P) Point to point is used where there are two points of interest: one sender and one receiver. This is also a scenario for backhaul or the transport from the…

One of the most often heard descriptions of WiMAX in the press is that it is “Wi-Fi on steroids”. In truth, it is considerably more than that.  Not only does…

Mobile WiMAX allows any telecommunications to go mobile. Mobile WiMAX takes the fixed wireless application a step furher and enables cell phone-like applications on a much larger scale. For example,…