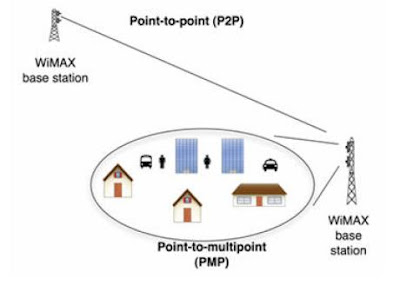 Point-to-Point(P2P)
Point to point is used where there are two points of interest: one sender and one receiver. This is also a scenario for backhaul or the transport from the data source (data center, co-lo facility, fiber POP, Central Office, etc) to the subscriber or for a point for distribution using point to multipoint architecture. Backhaul radios comprise an industry of their own within the wireless industry. As the architecture calls for a highly focused beam between two points range and throughput of point-to point radios will be higher than that of point-to-multipoint products.
Point-to-Multipoint (PMP)
As seen in the figure above, point-to-multipoint is synonymous with distribution. One base station can service hundreds of dissimilar subscribers in terms of bandwidth and services offered.
Related Posts

One of the most often heard descriptions of WiMAX in the press is that it is “Wi-Fi on steroids”. In truth, it is considerably more than that.  Not only does…

Mobile WiMAX allows any telecommunications to go mobile. Mobile WiMAX takes the fixed wireless application a step furher and enables cell phone-like applications on a much larger scale. For example,…

WiMAX is a coined term or acronym meaning worldwide interoperability for microwave access (WiMAX). What WiMAX is however at its heart is a standards initiative. Its purpose is to ensure…