The target eNB prepares HO with L1/L2 and sends the HANDOVER REQUEST ACKNOWLEDGE to the source eNB.

The HANDOVER REQUEST ACKNOWLEDGE message includes a transparent container to be sent to the UE as an RRC message to perform the handover. 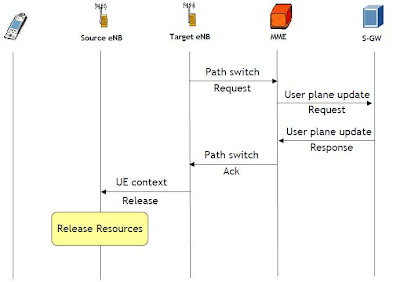 Types of Handover in LTE network

Intra-LTE Handover: In this case source and target cells are part of the same LTE network. means handover in same LTE cell.
Inter-LTE Handover: Handover happens towards other LTE nodes. means other Enb. (Inter-MME and Inter-SGW)
Inter-RAT: Handover between different radio technologies. For example handover from LTE to WCDMA. As similar to inter Vendor Handover.

The LTE/EPC architecture is driven by the goal to optimize the system for packet data transfer. Remember that There are no circuit switched components in LTE/EPC. There is a new…

Categories of UE in LTE is divided by its function which is as per below. Functionality: eNB obtains the UE radio capabilities via: • The S1AP initial setup request message…

Higher data rates: Obviously this is a general requirement requested from any new system. Quality of service, Lower delay: To enable true convergence between real-time and non-real-time services quality of…