Skip to content
WIMAX
Last updated: 7th Apr '16
How does WiMAX compare with the existing and emerging capabilities of 3G and Wi-Fi? The throughput capabilities of WiMAX depend on the channel bandwidth used. Unlike 3G systems, which have a fixed channel bandwidth, WiMAX defines a selectable channel bandwidth from 1.25MHz to 20MHz, which allows for a very flexible deployment. When deployed using the more likely 10MHz TDD (time division duplexing) channel, assuming a 3:1 downlink-to-uplink split and 2 x 2 MIMO, WiMAX offers 46Mbps peak downlink throughput and 7Mbps uplink.
The reliance of Wi-Fi and WiMAX on OFDM modulation, as opposed to CDMA as in 3G, allows them to support very high peak rates. The need for spreading makes very high data rates more difficult in CDMA systems. More important than peak data rate offered over an individual link is the average throughput and overall system capacity when deployed in a multicellular environment.
From a capacity standpoint, the more pertinent measure of system performance is spectral efficiency. We provide a detailed analysis of WiMAX system capacity and show that WiMAX can achieve spectral efficiencies higher than what is typically achieved in 3G systems. The fact that WiMAX specifications accommodated multiple antennas right from the start gives it a boost in spectral efficiency. In 3G systems, on the other hand, multiple-antenna support is being added
in the form of revisions. Further, the OFDM physical layer used by WiMAX is more amenable to MIMO implementations than are CDMA systems from the standpoint of the required complexity for comparable gain. OFDM also makes it easier to exploit frequency diversity and multiuse diversity to improve capacity.
Therefore, when compared to 3G, WiMAX offers higher peak data rates, greater flexibility, and higher average throughput and system capacity. Another advantage of WiMAX is its ability to efficiently support more symmetric links— useful for fixed applications, such as T1 replacement—and support for flexible and dynamic adjustment of the downlinkto-
uplink data rate ratios. Typically, 3G systems have a fixed asymmetric data rate ratio between downlink and uplink. What about in terms of supporting advanced IP applications, such as voice, video, and multimedia?
How do the technologies compare in terms of prioritizing traffic and controlling quality? The WiMAX media access control layer is built from the ground up to support a variety of traffic mixes, including real-time and non-real-time constant bit rate and variable bit rate traffic, prioritized data, and best-effort data. Such 3G solutions as HSDPA and 1x EV-DO were also designed for a variety of QoS levels. Perhaps the most important advantage for WiMAX may be the potential for lower cost owing to its lightweight IP architecture. Using an IP architecture simplifies the core network— 3G has a complex and separate core network for voice and data—and reduces the capital and operating expenses.
IP also puts WiMAX on a performance/price curve that is more in line with general-purpose processors(Moore’s Law), thereby providing greater capital and operational efficiencies. IP also allows for easier  integration with third-party application developers and makes convergence with other networks and applications easier. In terms of supporting roaming and high-speed vehicular mobility, WiMAX capabilities are some what unproven when compared to those of 3G. In 3G, mobility was an integral part of the design; WiMAX was designed as a fixed system, with mobility capabilities developed as an addon feature.
In summary, WiMAX occupies a somewhat middle ground between Wi-Fi and 3G technologies when compared in the key dimensions of data rate, coverage, QoS, mobility, and price. Table provides a summary comparison of WiMAX with 3G and Wi-Fi technologies. 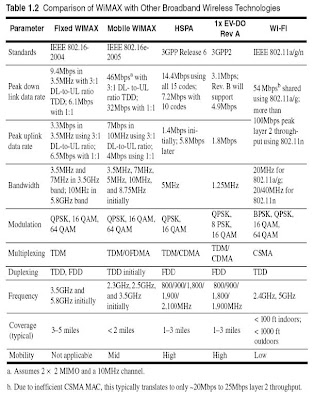 Naturally, the first application for which a wireless alternative was developed and deployed was voice telephony. These systems, called wireless local-loop (WLL), were quite successful in developing countries such as…

Less complex modulation. OFDM is a simpler modulation technique that is better suited to deployments that do not require support for mobility.  License-exempt bands. Mobile services require licensed spectrum to…

The photo above shows the WiMAX radio deployed in an enclosure. Note from left to right: a) copper grounding cable on the inside of the enclosure b) Ethernet connection to…