If the voice signal is modulated and transmitted directly after channel coding, due to the condition changes in mobile communication channel, a deep of the fading will influence a successive string of bits and cause high bit error rate.

In this way, even if errors occur, the errors are only concerned with a single or very short bit stream, which will not lead to that the whole burst or the whole message block cannot be decoded. In this case, the channel coding will take effect and recover the bit errors. This method is called interleaving technique. The interleaving method is the most effective coding method for dispersion of bit errors.

The key point of interleaving is to disperse some bits( suppose there are  “b” bits) of the code into some ( suppose to be “n” bursts) burst sequences so as to change the adjacent relationship between bits. The higher the value of “n” is, the better the transmitting works. However, the transmission delay is higher too. Therefore, a balanced consideration is needed, the interleaving is related to the purpose of the channel. In the GSM system, the second interleaving is applied. 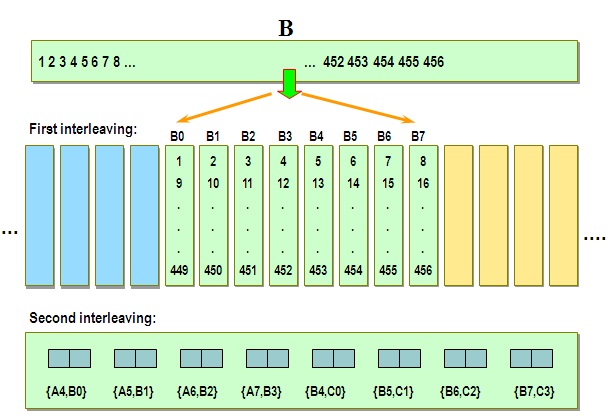 Suppose that  voice block B is divided into 8 groups: perform inter-block interleaving to the first four groups (B0, B1, B2 and B3) of block B and the last four groups (A4, A5, A6 and A7) of the previous voice block A ; thus, four bursts are constituted: (B0, A4), (B1, A5), (B2, A6) and (B3, A7); to break the adjacency relationship between successive bits, bits of block A occupy the even position of the burst while bits of block B occupy the odd position of the burst. For example, B0 occupies the odd bit of the burst while A4 occupies the even bit.

Similarly, perform interleaving to the last four groups of block B and the first four groups of the next block C. After the second interleaving, a 20ms voice block is inserted into 8 different burst sequences respectively and then transmitted one by one. Even if a whole burst is lost during transmission process, only 12.5% of each voice block is influenced and the errors can be corrected through channel coding at the other end. In addition, the second interleaving for the control information is different. The interleaving mode is (B0, B4), (B1, B5), (B2, B6) and (B3, B7).

To check and correct errors during the transmission, redundancy data and the information calculated from the source data are added to the stream so as to increase the bit rate….

The coding mode is called Regular Pulse Excited-Long Term Prediction (RPE-LTP). It works as follow: 8KHZ of sampling is performed first, then divided into frames with 20ms; every frame has…

To Improve Error Protection and Security of Data the Data is Interleaved and its type is Diagonal let’s check how it works. The diagram below illustrates, in a simplified form,…