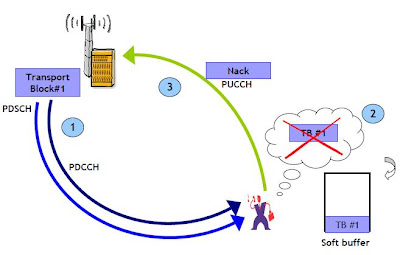 1. The Transport block is transmitted to the UE on the PDSCH.
2. The UE receives it but it is erroneous. The TB is stored in a buffer.
3. The UE transmits directly a NACK concerning the erroneous block on the PUCCH.
One HARQ entity in the UE and the e-UTRAN
Made of 8 HARQ processes in each direction (extended to 16 in DL MIMO)
Each process handles STOP and WAIT HARQ protocol
Each process is responsible for generating ACK or NACK indicating delivery status of PDSCH/PUSCH 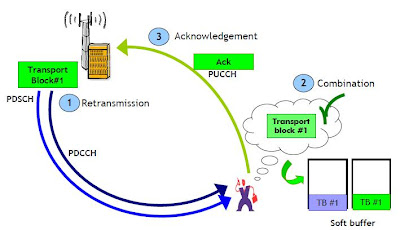 1. On reception of the NACK, the eNodeB retransmits the TB.
2. The UE receives it. Even if the retransmitted TB (Transport Block) is erroneous, the UE can try to recombine the 2 TB to have a correct one.
3. The UE send a ACK on the PUCCH. 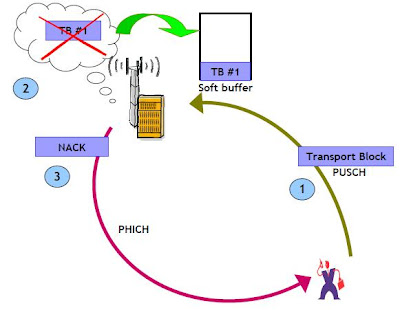 In UL, it is the same principle, but the eNodeB send the ACK/NACK on a channel dedicated to the H-ARQ called the PHICH.
Related Posts

The radio retransmission mechanism is called Hybrid Automatic Request (H-ARQ). H-ARQ allows to retransmit fastly erroneous blocks between the eNodeB and the UE. It avoids long retransmission between 2 TCP…

The PDCCH, Physical Downlink Control Channel, allocates the DL and UL resources. There is one PDCCH per sub-frame.   It helps the UE retrieve the transport blocks from the PDSCH:…

The data in DL are sent on the PDSCH  A minimum of 2 RBs are allocated by the eNodeBs.  A RB is 12 sub-carriers on a slot (7 symbols).  The…